‘Maley’s Artisan Chocolates’ specialises in hand-crafted, naturally favoured fine chocolates from truffles to bars to lolly pops. Participating in TestTown Falkirk and Glasgow Saltmarket gave Michael the inspiration and confidence to move to the next step, opening his own shop in Falkirk town centre. From no 46 Graham St, Michael and his team produce, sell and run workshops to share Michael’s passion for chocolate making with others.

Jonny and Graeme took part in the first TestTown event in Dunfermline 2013 with their business ‘Functional Fitness.’ Graeme talks about their business journey since – opening two gyms in Dundee and St Andrews and what he thinks needs to change for town centre and high street entrepreneurs.

The Grand Final of Carnegie UK Trust’s TestTown 2015/16 was held in Glasgow Saltmarket and the Briggait over the week beginning Mon 22 Feb 16. Supported by partners, Glasgow City Council and City Property LLP, 12 of our finalists from across the UK and Ireland opened up pop-up shops and spaces competing for the crown of UK Towns Entrepreneur of the Year and £10,000 investment. This film documents the week- from the finalists consulting with the Saltmarket traders, to setting up the pop-up shops, to trading, to the announcement of the winner. It captures the highs and the lows, the challenges, the fun and the experience. Here’s to many more! www.testtown.org.uk

In 2014 TestTown expanded across the UK. Six towns took part in running local heats which took place during different weeks from May to August. The host towns were Bury St Edmunds, Manchester, Middlesbrough, Rhyl, Kirkintilloch and Coleraine. At each event, five teams of young people had the opportunity to test out their ideas on high street, in a similar format to the 2013 pilot. The competition was open to 16-30 year olds across the UK and applications were made via a central website. Teams were encouraged to display collaboration with local businesses, excellent customer service, team work and business longevity. The winning team and runners-up from each of the local competitions were invited to take part in the National Final. The National Final was held in Cambridge in October 2015 and again used the format of a pop-up shop festival allowing the participants to have another opportunity to trade on a real high street. Aaron Drake with his alternative Brewing company ‘Zymurgorium’ walked away with the title ‘UK’s 2014 Start Up Entrepreneur of the Year’ and £10,000 in start-up business funding- @Zymurgorium

TestTown piloted in Dunfermline in 2013, after two years of planning and development. The project was run by the Carnegie UK Trust working with Fife Council and local BID Dunfermline Delivers as local hosts, and set a challenge for 16-30 year olds to come up with innovative business uses for town centre spaces. Young people across the UK applied through a national online system, over a three-month period. Eleven teams were selected by a business judging panel to come to Dunfermline for the finals festival event in June. Each team was given a small business grant, mentoring and support. They were given two days to set up in vacant units across the town and two days to trade to the public. Our aim was to see if young people had something new to offer town centres; to provide them with chances to test out and grow new businesses; and to see how consumers responded to a different experience happening in their town. 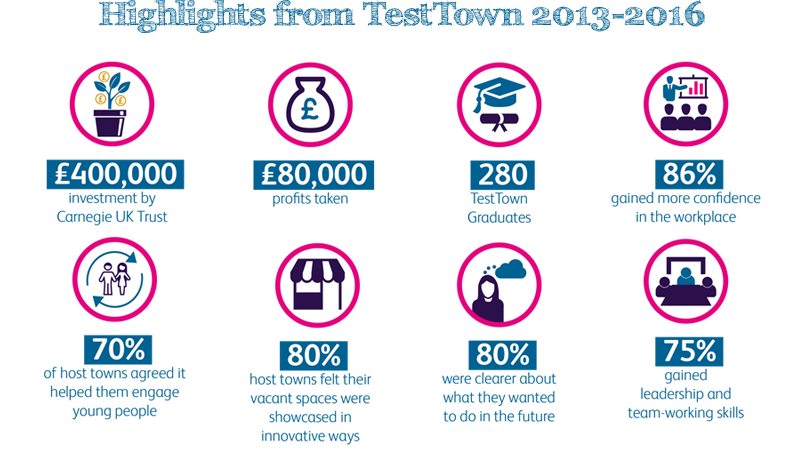 Five Ways To Supercharge Your TestTown

We believe there are five things which would Supercharge your TestTown: